Earlier this year, I submitted my ice-themed time rift to the Steam Workshop, and I was rather surprised not only to see how many people have viewed and downloaded the map, but also left positive reviews.  At the time of writing, the map has a 5-star rating, with 944 players leaving reviews and 1,556 players being subscribed to it (plus, 18 favorites!).  This is rather surprising, considering how little pre-planning went into the map, and the fact that it was my first attempt at a mod for the game overall...

Looking at some of the notes and screenshots in my previous post, not much had really changed.  I did want to place more effort in creating something that resembled a difficulty curve, rather than just haphazardly placing obstacles in hopes that they would create something interesting.  Overall, I stuck to the use of the 4 main obstacles (rotating ice cubes, rotating pie-shaped platforms, slides, and grapple hook points), but the way they were presented to player was altered slightly.  Where the start of the rift had 3 rotating cubes originally, the later revision replaced them with 2 static platforms and a singular rotating cube, as a means of introduction to the obstacle. 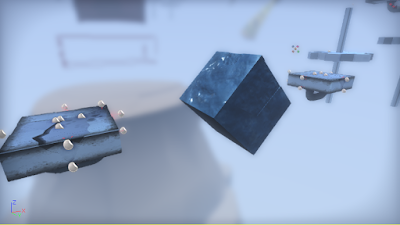 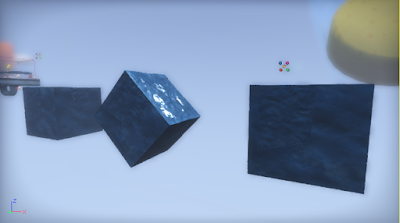 This idea was also applied to the spinning gears, which would spin at a faster rate later on in the rift, and the pie-shaped platforms, which would be missing additional pieces as the player got closer to the end. 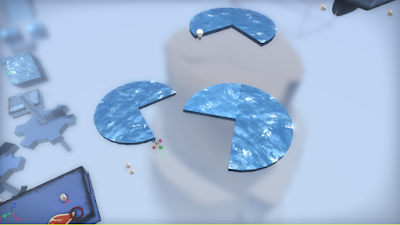 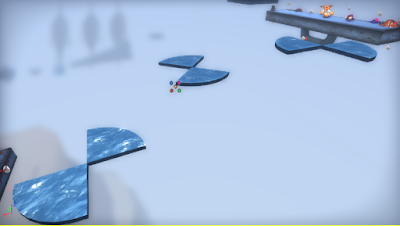 Difficulty curve aside, much more of the time and effort went into creating a course that offered fluid navigation, and placing aesthetic elements (lighting, particles, decals) to support the chosen theme.  Thankfully, the base set of assets featured in the tool set allowed me to create a setting that felt very much like a "grimy" industrial freezer. 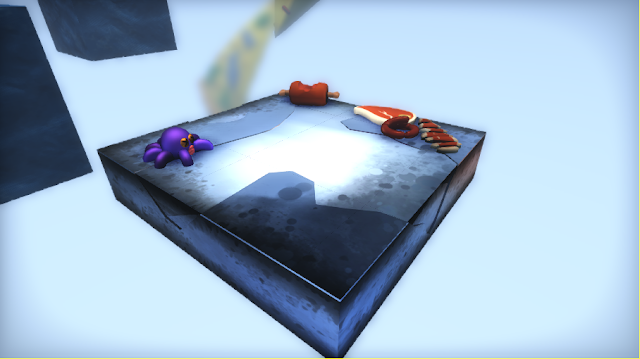 I would very much like to update this map in the future with ice physics, if I manage to take the time to learn how to create customized volumes within the UDK.  As it stands, there are no means for modders to create flat slippery surfaces, unless they manage to code it themselves.  There is currently a volume that will force the player to slide down a slope that is too step to stand on, and it may potentially offer some solutions to simulating the feeling of walking on ice.

Until then though, I'm going to move forward with my level design studies into what are referred to as "Purple" Time Rifts. 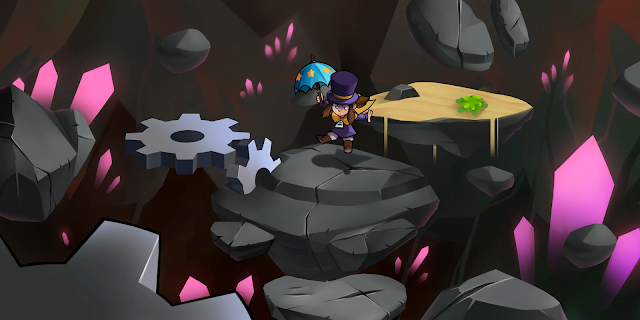 Purple Rifts are sub-levels found within each chapter that are typically used to help tell stories about key characters or settings.  They are structured quite differently from Blue Time Rifts amd regular chapters in that they have their own sets of sub-levels and a unique collection system, more similar in style to the collect-a-thon games of the 90's.

Aside from from the green and red "pons" that the game utilizes for currency and health (respectively), Purple Time Rifts introduce "Rift Pons" and "Storybook Pages".  Rift Pons must be collected in order to proceed through each rift's sub-levels, and are spread out among a map, typically at points of interest or after particularly challenging action-paths.  Storybook Pages, on the other hand, are entirely optional collectibles that are well hidden in each sub-level.  Each page contains an illustration that is revealed once the level has been completed, offering additional details to the story that the level's environment may not have been able to reveal. 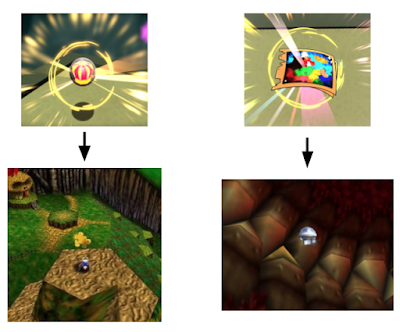 This collectable system is similar to the one that would be found in Banjo-Kazooie, albeit on a much smaller scale.  Rift Pons reflect Jiggies in their importance and difficulty to achieve, while Storybook Pages reflect Mumbo Tokens in their rarity and placement.  Players will often have to search every nook and cranny in order to find and collect all of these pages, while Rift Pons are usually a clear goal that the player is actively in pursuit of.


However, while the collection of Rift Pons are required to progress, it is worth noting that the number of Pons required to open the next Rift Gate is often less than the number of Pons available in each sub-level.  This allows some freedom of choice for the player, as they can "bank" some Pons to use in a future sub-level if there future are challenges they choose to avoid.  This was a common design choice in previous 3D-Platformers, as it encouraged back-tracking through previous levels, should players get stuck when trying to progress in levels later on in the game.  However, in the case of these Purple Rifts, progression is a one-way street, and the collectables are self-contained; Rift Pons and Storybook Pages have no impact on the game outside of the level.

"Purple Time Rifts are created when a time piece crashes into a person, causing the rift to be themed around them. These rifts lead to a strange dimension where the world resembles the chapter they can be found in." - Hat in Time Wiki

The above quote, found in the game's wiki pages, provides a little more context for the purpose of these rifts and the reasoning for their appearance.  As previously mentioned, the Storybook Page collectibles found in these rifts are used to help further tell the story of key characters in the game.  However, unlike the "Blue Time Rifts" we explored in a previous post, Purple Time Rifts have much more variety in their setting, reflecting the environments of the chapters they are attached to.  This can be seen by each rifts use of familiar props and characters. 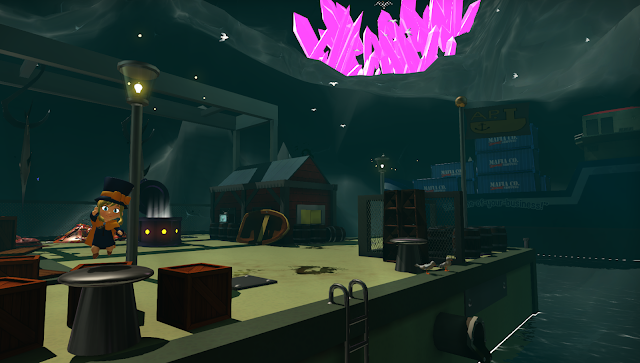 I had originally started my own Purple Time Rift way back in April, when I had attempted to participate in the modding contest hosted by the game's developer, Gears for Breakfast.  However, I far underestimated the effort that would be required to complete my vision for a new map, and far overestimated the amount of time I had to complete it.  At the time of writing, I have approximately 336 hours in the Hat in Time Editor, and I have given myself a deadline of December 21st to complete my project.  My next post will be a much lengthier dive into my development of the map, not only observing and applying the design philosophies of Purple Time Rifts but applying common level design practices as a whole.

Until then, I figure I could at least add a few in-progress screen shots from earlier in development.  I will be on vacation after the map is finished and released, so the follow-up blog post will not be written until early next year.  At that time, I'll probably also be posting some tidbits about my 2018 experience as a whole, and maybe discuss my plans for 2019. 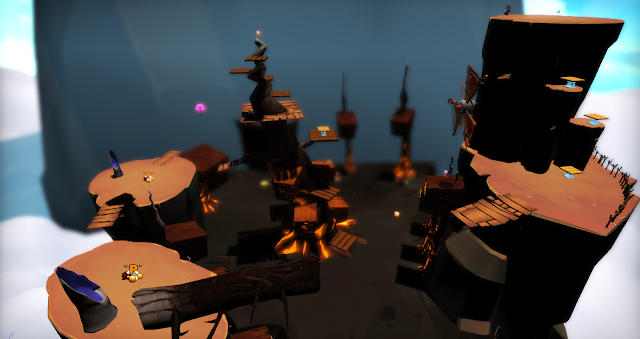 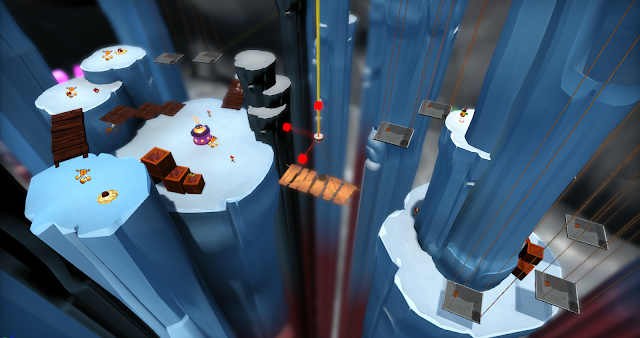