Yessir, the holidays are coming.  In fact, Christmas is only 6 days away!  Might not be the best time to jump back into "Depth", but its collected dust long enough... 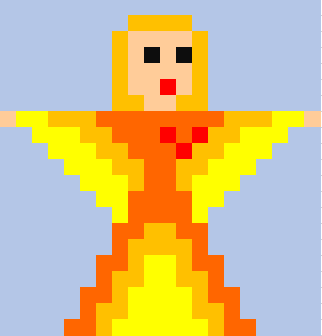 I think its pretty safe to say at this point she is a part of the team.
She has also begun to produce a score for the game, which can be found here.

Where We Left Off

Upon opening GameMaker once again, I am reminded of the stopping point of the last session:

This probably doesn't look like much...
What is going on here is an attempt to start a level I had designed last semester.  What it is meant to be is a slippery-slope;  the protagonist is caught sliding down a slope and can only (slightly) control how fast he is going by pressing the left and right arrow keys.  What I am currently working on is allowing the character to jump while stuck sliding down this slope.

It might be important to note that I've started moving into level design with this... thing.  There is still much I need to cover about game maker, like tying rooms together and actually creating a start and ending point.  But the creative aspects of game design are just too hard to ignore.

It would appear I had a hard drive fail while I was in the midst of creating this post.  Naturally, it would be the drive with the operating system as well as the files for the game.

Thankfully, not all is lost.  Keeping this blog allows me to go back and review/reuse the code I have already written in reconstructing the progress I have made.  We are closing in on the start of the next semester (I started writing this blog post ~2-3 weeks ago), but I'm still going to try my best to dedicate the time to re-build.

Hope you all had wonderful holidays,
-JWest
Posted by J.West at 3:35 PM No comments: