If you have read any of my previous work, you'll know that I have a... "thing" for the 3D Platformer Collect-a-thon genre that was popular in the 90's.  These are the games that I grew up playing.  Last year we saw a good number of releases, most of which were met with mixed reviews (see Yooka-Laylee, Snake Pass, Freeze-Me).  There is one, however, that would surprise everyone and made it's way to being the 2nd highest rated game on Steam in 2017: A Hat in Time (referred to as "AHiT" from here on out).

For being the first game for the studio Gears for Breakfast, and the first game ever created by Jonas Kaerlev, there is so much that AHiT did right.  "Hat Kid", much like Mario on the Nintendo 64, is an absolute joy to control, with movements that were easy to learn and a bit difficult to master.  Badges could be purchased that manipulated gameplay in fun and interesting ways, like granting the player the ability to sprint or freeze time.

What astounded me the most, however, was the level design.  AHiT offers so much variety in it's spaces that I never grew tired of playing.  One moment you're at ease, exploring the open and inviting world of Mafia Town, and the next moment you're sneaking around on the Owl Express, gathering clues to track down a murderer.

I haven't been able to get this game out of my mind.  AHiT is a huge step towards what the modern 3D Platformer could become.  And seeing as it comes with it's own set of modding tools, I figured its high time I tried my hand at actually creating my own spaces to play in, rather than sitting around and critiquing the worlds that others have laid out for me.

There is a fantastic opportunity here for me to expand my own design experiences and learn something new.  What better way to do this as a hobbyist than by modding a game I enjoy?  A Hat in Time offers it's own tool set for creating new levels, hats, skins, and other assets, all based in the Unreal 3 Development Kit.  Not only do I get the chance to design levels for a 3D Platformer, but I get to learn a new engine while I'm at it.

As I will be learning many things as I go, I figured it was a better idea to keep track of my progress through individual blog posts rather than one large essay, like I did with Yooka-Laylee.  I'll do my best to research particular aspects of AHiT's worlds as I attempt create my own, learning what ideas could work in practice and which don't. 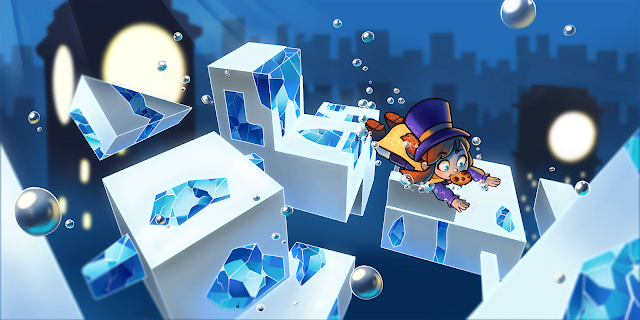 The modding community over at the AHiT Discord strongly suggested that anyone just starting out with modding should take a look at the Time Rift template that can be used when starting afresh.  The template level is quite simple to work with; a small obstacle course with a spawn point, check point, time piece, a revolving platform and a couple of stationary platforms.

I bolded the term obstacle course in that last sentence because, in essence, that is what the most basic of the Time Rift levels often turn out to be.  There aren't any new move sets or concepts introduced in Time Rifts, they are meant to test the player's mastery of what they have learned so far.  The first two time rifts the player would typically come across are within Mafia Town (Sewers and Bazaar), neither of which require the use of additional hats or badges to complete.

** Note, for the purpose of this particular post, I am focusing on the more basic rifts.  Purple (or cave) rifts, while similar in nature, have more complexities to them (collecting, narrative, sub-levels), so I will be saving those for another time.

Rather, they utilize Hat Kid's movement-based mechanics in interesting ways (wall climbing, diving, and of course running and jumping).  These time rifts aren't available right away - they only appear as the player progresses.  Looking once more at Mafia Town, the first time rift, Sewers, doesn't become available until after the player earns the time piece for "Down with the Mafia", the 4th act of the chapter, which provides the player with ample time and opportunities to learn and master that basic set of mechanics.

At their very base, platforming levels could be considered as string of obstacles or micro-challenges for the player to overcome.  The "Blue" Time Rift stages are a prime example of this, as each rift re-uses similar assets in new ways to put the player to the test.  There is only one objective (time piece at the end of the course), and, for the most part, the way to get there is fairly linear.  The first two rifts, featured in Mafia Town, take the average player about 1 minute to complete, and require nothing more than a firm understanding of Hat-Kid's base mechanics: running, jumping, climbing, dashing, etc.

As the player progresses, however, mechanics that are introduced in a world are placed into their corresponding time-rifts.  The next pair of blue rifts the player would be expected to come across are in Battle of the Birds, both of which are a bit more complex than their Mafia Town counter parts.  "The Owl Express" uses the pressure-plate switches found in the Acts "Murder on the Owl Express" and "Train Rush" to create exploratory puzzles, while "The Moon" utilizes the band-following mechanic from "The Big Parade" and designs a level that discourages the player from taking the same route twice.

While creating a mod map doesn't necessarily require you to stick to the mechanics featured in particular Acts or Chapters, I've learned that simply focusing on a certain set of mechanics or a theme can often help with design direction, and give a more cohesive feeling to the level without throwing in too much.

When thinking of what sort of interactions I wanted in my own rift level, I was particularly fond of one set of actions: sliding, jumping, and ending on a grapple hook.  The idea of sliding made me think of ice, which in turn gave me a theme, "Mafia's Icebox".  I wanted to try to give the impression that the rift was taking place within an industrial refrigerator, without straying too far from the basic set of time rift blocks.  In the end I focused on the interaction with grapple hooks and slippery surfaces, doing what I could with Unreal Matinee and Kismet to create challenges around these concepts.  You could consider this both a bottom-up and a top-down approach to designing this level, as focusing on one set of interactions provided me with a theme to work with.

Ultimately, I wasn't looking to make a challenging level for the average player; I instead wanted to make a level that was more enjoyable and a little tricky to try to speed through.  In that mindset, the pathways ended up being extremely straight and linear, with only 4 hard turns until the goal was reached. 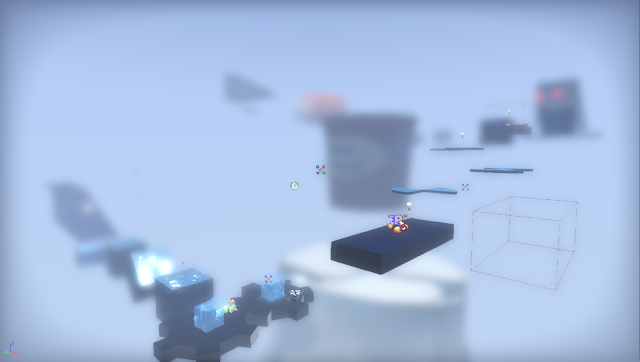 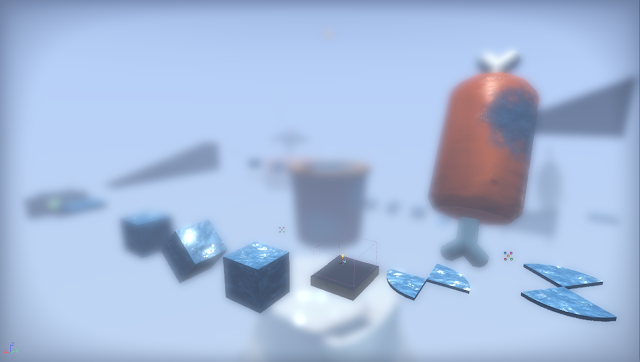 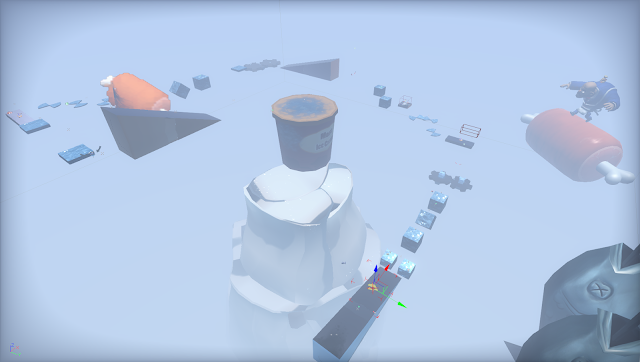 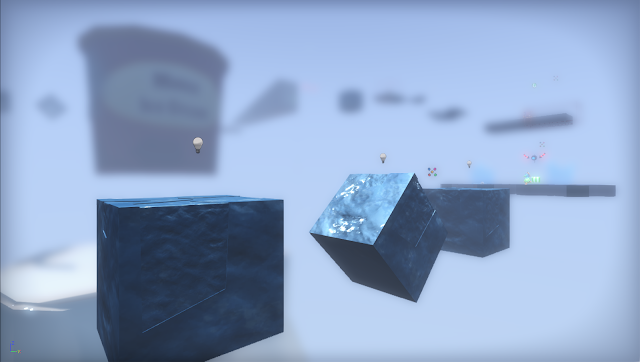 I do enjoy playing with the fog settings.

What has really become tricky is using materials and lighting to create the feel of ice and cold steel.  This is why there are individual jobs for lighting and environmental artists, neither positions of which I have much experience in...

The first iteration of this level re-used most assets at least twice:
While this helped to create the consistency I was looking for, it doesn't really have the right balance of variety to really keep the player on their toes as they progressed.  Simply increasing the speed that the gears would turn or changing the arrangement of platforms doesn't quite give the increasing sense of difficulty a linear level like this should.  I need to find a way to remix some of these obstacles to make the progression changes a bit more drastic...  Maybe add a few more static grapple hooks as a means of traversal.


I had originally planned to complete this post and share it once the level was done.  However, during the process of designing this Rift and writing this post, Gears For Breakfast officially released the Modding Update for AHiT, and even started a $1000 mapping contest for the best Purple Rifts the community could offer.  This is an opportunity I am extremely excited about, and as much as I hate jumping ship in the middle of a project, I might have to make an exception for this one.  The contest goes until April 27, so after that point, I'll see about finishing this "Icebox Rift" and maybe write a reflection post about what I learned while creating my own Purple Rift.