I'm taking a small break from the Nerdy Nights tutorials and looking ahead to the hardware implementation of this project.  It has been my understanding that in order for me to write my own code onto a cartridge's ROM chip, I would need to get my hands on an EPROM programmer.  Thankfully, the University I study at happened to have one: 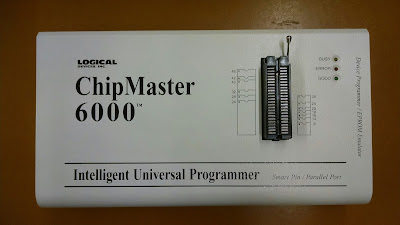 I spent a few hours with my professor teaching ourselves how it worked using a GAL chip to create some basic logic gates.  Fortunately, even as outdated as this programmer is, there was still software available for it online for Windows XP (at the verrrry bottom of the download list).  It took some effort before we were able to get the programmer into a working state. 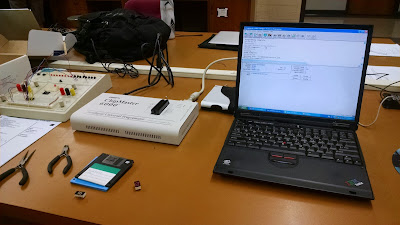 Thankfully, my research brought me to a a great "how-to" article on the ROM programming process by The Poor Student Hobbyist.  It looks as though the process of actually programming ROM chips and adding them to the cartridge PCB will be quite simple; the trick will be determining what size EPROM chips I will need for my CHR and PRG files.  It looks as though 128k and 32k size chips were popular for most NES cartridges at the time (source).  Which one I will need will naturally depend on the size of my game.  Either way, most of the EPROM chips used in these cartridges are compatible with this programmer, so I should not face any issues with equipment.

However, the concept of mappers are coming up again.  It might be time to write about them, either in an edit to this post or the next one.

This will be a little side post to talk about my current set up for working on this project.

Currently, I have 3 machines I plan on using:
As I am obviously looking to make my work as portable as possible, I am exploring the best method for storing files.  Currently I am just sticking to dropbox for any of the Nerdy Nights sample code, ans it will allow me to make sure that the software is working in a similar fashion across all platforms.  When I actually start building my own game, I am fairly certain it will be kept on github.

Since my last post, I have added a few more resources to my bibliography (which will be a separate post at the end of the project).  I recently received the book "I am Error" by Nathan Altice in the mail, and it so far has been a fantastic read.  It dives into the hardware or the NES and Famicom systems pretty early on, so I will probably reference the book a bit more in future posts.

I will also be cross-referencing a lot of terms and concepts from the "Nerdy Nights" tutorials with info from the NesDev Wiki.  As these tutorials are meant to sort of get you programming fairly quickly, they gloss over a lot of the details as to the inner workings of the hardware.  Hopefully my posts will be able to help make a bridge between the code samples and the interactions with the processors and memory. 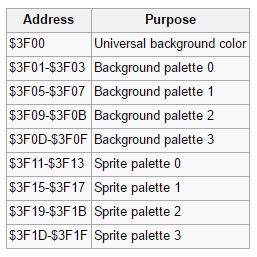 Moving over to the programming...

Courtesy of Nerdy Nights - Week 4.  Each hex value represents one of the usable 64 colors in the PPU.

In this case, the tutorial will be setting the color palette for sprites ($3F10).

Thankfully, "bunnyboy" points out that a much easier way to go about this is to create a ".db directive"...

A .db directive essentially works like the arrays of modern day programming, storing a large group of values into one place.  This can be combined with the use of the X Index register, which allows the program to step through each byte of data individually.


Once the above code finishes its application, the color palette is set up and ready to go.

The next post will go into more detail about the second part of "Nerdy Nights - Week 4": Sprites.  Seeing as how much information was put into a single post for color palettes, I may save the Sprites post for a later day this week.

I originally started this post a little more than 3 months ago.  Two things have happened since...
Hopefully, the result of the above events will result in a blog post AT LEAST once a week (as I will have to attend class to work on it anyway.  The ultimate goal now is to (hopefully) design an original game, and look into the equipment required to write it onto a cartridge, and write a paper reviewing my research and methodology.

This post will be based upon Week 3 of the Nerdy Nights Tutorial, as well as diving further into the 6052 processor.  As I already have some familiarity with assembly programming, I may skip over some of the basics.  If I somehow manage to get people who want to know more, I'll update.

The memory addresses of the 6052 processor are divided up as such:
The last set of addresses ($8000-$FFFF) will store the bulk of our code.

Like other microprocessors during this time, the 6052 has 3 key 8-bit registers that will no doubt be used frequently: Accumulator (A), and Index Registers X & Y. The accumulator is typically used to store data and perform basic math operations, while the two indexes are ofthen used to keep track of loops, counting, or accessing memory.  There is also a status register that hold information about the most previous instruction the CPU performed.

This part of the post may require some research before I post any notes.  It appears for the purpose of emulation, we will be using an assembler known as NESASM3.  Below will be a few new concepts  that will be required in each programfor emulation.


I have highlighted a few topics topics so that I may come back to them and add more info.
I am considering scanning my notebook page where I printed off the Nerdy Nights "background.asm" example code and made annotations, as I feel it would be better seeing each of the above code snippets in context.  Maybe I will just make that a separate blog post.

The next Nerdy Nights lesson goes more in-depth on the PPU.  I will save the code overview notebook post until after I share those notes.

[1] The "V Blank" state is the period when the PPU refreshed the screen.  I don't recall if I had already clarified that term before this post or not.
Posted by J.West at 5:32 PM No comments: